‘So what is Christmas all about?’ asked Enrie Molina, deferred parole notice in his hand.
‘For me, this year, freedom!’ answered his cellmate smiling, thinking of a typical day in those miserable surroundings. 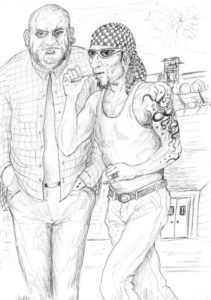 He hardly dared to believe that this Christmas represented freedom. He had spent so many days in confinement in that small dark miserable room, with its solid door and tiny windows restricting light and blocking any view of what lurked on the other side! Sound was everything. The footsteps on the landing, the high-pitched clanking of the warden’s keys and sometimes the insane shouting of the other prisoners: The bolts being released on the doors. The morning cry, ‘Slop out.’ Then there were the smells. The constant smell of urine and sweat! Even fear had a smell. Was it Tuesday or Wednesday? Who knows? Who cares? Thank God it was another day nearer to release, yet it seemed an eternity away. The voice in the distance ‘Landing 4, desayuno.’ The thought of the silent walk down the corridor for a cold mug of weak coffee and a cob of stale bread made him wonder, ‘Why do I bother?’

Lost in his memories, until he looked into Molina’s eyes, for him there was no freedom this Christmas—another year to wait. Yet, we reap what we sow and he was paying the price. For the other inmates too, it was mundane work, soul-destroying in its repetitiveness. If they wanted a piece of chicle or perhaps sugar in their coffee, they would have to work. No work; no perks. He remembered Enrie’s words when he came out of solitary and shared his cell.
‘Keep your head down. Don’t upset anyone but most of all me! You don’t know what these guys are in here for: burglary, arson, drug trafficking, rape or murder. The most angelic face can hide the most vicious of natures. Stay on guard and just do your time quietly.’
It was the best advice anyone could ever have given him.
Dinner, oh deep joy! The call for dinner and his last meal in that God-forsaken place: some sloppy beans and something vaguely resembling meat. A fight broke out in the corner and the inmates were quickly escorted back to their cells. Christmas this year represented freedom for someone.

It was his last night and he couldn’t sleep. He was almost afraid to sleep in case it all turned out to be just a dream. He lay on the bunk, eyes a glaze, staring but seeing nothing; thinking, but his head empty. No, he dare not sleep; he dare not think. He was waiting, waiting for daybreak. The hours passed slowly. That last night seemed to last forever and then suddenly as if he had missed something, a segment of time, there he was outside the prison gates, gulping fresh air, awash in the sun.
Wearing dark glasses, a black-and white checked bandana and jeans he looked positively guapo. Brown skin, a tattoo on his upper arm, a fake diamond stud in his right ear. How long he had yearned to be free. He had wasted nine years of his life. The feelings rose up inside him. Young enough to start his life again, and this he was determined to do. He would close the doors on the past and as he walked away from those dark, angry-looking walls, which housed so many secrets, he felt reborn. The pain of the days inside quickly faded but the memories would stay with him forever. Once he was bitter and angry, because he had been convicted of a crime he didn’t commit. Yes, he had dealt a little coke here and there, but murder no, definitely not! He was in the wrong place at the wrong time, framed for something he didn’t do. His desire for vengeance had gone. It was in God’s hands now. Believing everyone would be accountable to their maker one day, he just wanted to focus on the future. It was a most exhilarating feeling. Yes, he felt reborn. With no money and virtually no belongings, what little he owned fitting in a torn, brown, paper bag, the future was daunting. Murmuring to himself and thanking God for Nick and Enrie, the dudes who had befriended him inside, he walked on. Shame about Enrie’s parole: Nick had been out for the past couple of months but Enrie Molina’s parole had been postponed again. The three of them had forged quite a relationship, as you do sharing a tiny cell for several years!

He waited hesitantly, enjoying the taste of freedom and a smile of relief crossed his face as he saw the friendly face coming round the corner in a rusty, clapped-out jeep, tooting his horn.
‘Jump in mate,’ he shouted. Eyes dazzling and grinning from ear to ear, he threw open the passenger door, which was so old and rotten; it creaked painfully and very nearly came off its hinges.
‘What’s the plan?’ asked Nick.
‘No plan,’ he chortled. ‘Just one day at a time.
‘What have you been doing this last couple of months?’ he asked Nick.
‘Oh this and that.’
‘Good to be out, eh!’
‘Yeah, sure is pal! Juan there’s a deal…’
‘Don’t even think about it, don’t even mention it. I’m going straight.’
‘Now come on dude, here’s the deal …’
‘No man, I’m not rolling. I wouldn’t trade the peace that I have in my heart for anything this crazy world could offer.’
Nick looked at Juan curiously.
‘What you on pal? What ‘appened to you? Sounds a bit profound for you.’
‘Nick, all that this world offers are diamonds made of dust. I’m richer now than gold could ever make me,’ said Juan smiling.
Nick’s jaw dropped. Staring at Juan, he nearly collided with a tree that seemed to loom up from nowhere. Swerving to regain control of his jeep, he leaned forward precariously pressing his forehead against the windscreen.
‘You’re different dude, what ‘appened to you? ‘Av you ‘ad one of those God experiences or something?’
Juan smirked, ‘I’ll tell you over a nice cool beer but do you wanna know what I’m gonna do with my life now? I’ve business then I’m gonna find my kid.’
‘What kid? I didn’t know you ‘ad a kid. You kept that one quiet.’
‘Yeah well! I once met a girl, the most beautiful creature you ever did see. I didn’t treat her real good, and I’m not proud of it. She was pregnant when I got locked up. Never did see her again. I don’t even know whether it’s a boy or a girl but the kid should be about nine years old now. Yeah, I’ve got business then I’m gonna find my kid.’
The car drove on.