O.K for those of you who don’t know any Spanish, el campo – the countryside, la costa – the coast.

I’m typing this blog whilst still keeping a keen eye on my little granddaughter who is being entertained by yes, a children’s entertainer, the sort of thing that irritates me but the kids love. Seems that plenty of these adults are enjoying the show too, but magic and tricks is just not my thing. In many ways I feel like a fish out of water because I seem to have chosen the only hotel on this coast with no Brits, and certainly hardly anyone one over the age of 30. Young families, pushchairs and pre-school kids running around everywhere, what am I doing? Or as I say quite frequently these days, am I crazy or what? It’s certainly quite different to the place we stayed on the other coast when we first arrived in Spain. I assume it’s the children’s entertainment that’s attracting the clientele.

Well I have promised that she will have a holiday with me every year but as I now have 3 granddaughters it will be interesting to see what the future holds. Not sure that I could cope with too much of this though. 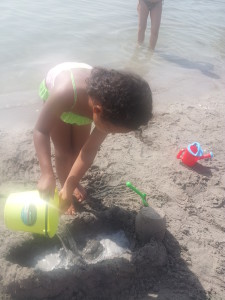 It’s one of those scenarios, been there, done that. And the comment I had last night when I took her to the disco was, “be careful what you say nanny, don’t embarrass me in front of the boys.” W-h-a-a-a-t?

Could we make a movie perhaps about Nanny Mckann and her holiday adventures? At least I’m not quite as ugly as Nanny McPhee. Gosh she’s scary!

So what observations have I made today? Children just want to have fun of course, as do girls when they get the chance. My turn next week when little granddaughter goes home.

Meanwhile, I might offend a few people when I say this and I suppose I shouldn’t generalise but I have been travelling to Spain regularly for 15 years and can now ask after some consistency of behaviour;-

·         Why do the Spanish not park properly and abandon their cars anywhere?

·         Why do they seem content to block the road and make you wait whilst they decide to wind their window down and chat to a friend, travelling in the opposite direction.

·         Why do they look at you with suspicion when you say good morning or good evening (even in Spanish) as if to say, why are you speaking to me I don’t know you?

·         Why they seem to have no manners, even my granddaughter commented on the rudeness of more than one. And she was talking about the adults not the children.

·         I would say why don’t they discipline their children and teach them not to fill their plates with mounds of food at the hotel buffet, knowing most of it will go in the bin – ‘cos their eyes are bigger than their bellies. Oops! That’s nothing to do with Spain that’s parents everywhere! Don’t get me on that one. I would love to do a blog about good parenting and child care practice. Awh! So much to do and so little time to do it.

I digress but I read an article in a magazine yesterday which highlighted the fact that we would have time to do so much more in life if we watched less television particularly soaps. Yes, how to have an 8 day week.

Do you know the average soap watcher loses a minimum of 10 hours per week when they could be doing other things? Then it’s all relative, I suppose they would say they enjoy watching them and that’s how they relax.

Isn’t it interesting that I always start blogging about one thing and end up wandering on to a completely different subject? So back to Spain and having grouched a little, I still love the country and have plenty of Spanish friends.